Our Services The Orthodox Funeral Service

The coffin is carried into Church feet first and it is placed so the deceased is facing the altar. It is tradition that the family members are pallbearers.

The coffin is usually open for a Greek Orthodox funeral service so that family and friends can kiss the deceased and bid them a final farewell. An icon of the Resurrection (Anastasis) is placed either in the coffin or next to the coffin on a stand.

As mourners enter the Church, Victoria Funerals staff attend to the signing of a Memorial Book or hand out Memorial Cards. They can assist with donation envelopes if requested by the family. The Orthodox funeral service is generally conducted in Greek. In some Churches the funeral service is offered in both Greek and English.

Photos of the deceased are not permitted on the coffin or at the altar in Greek Orthodox Churches in Australia.

Family members cannot deliver eulogies in the Greek Orthodox Church in Australia but if the family prepares a eulogy the priest will read this on their behalf.


The Orthodox Funeral Service in detail.

The Orthodox funeral service emphasizes the reality of death and the new life of the deceased. It is a positive service featuring prayers for forgiveness, repose and God mercy for the departed soul. The funeral vigil begins with the chanting of Psalm 91, followed by the special Great Litany for the dead.

The troparion and the kontakion of the dead, as all hymns of the funeral vigil, meditate on the tragedy of death and the mercy of God and petition eternal life for the person who is fallen asleep. I am the image Psalm 119

My soul is drowsy from indifference; strengthen me with your words. Incline my heart to your testimonies and not to personal gain.

The psalm sings of the victory of righteousness and life over wickedness and death. “Blessed are you O Lord teach me your Judgments”

”Of your ineffable glory, though I bear the marks of transgression. Forgive your creature, O Master, and cleanse me according to your compassion; and restore me to the place I long for by making me again a citizen of paradise.”

“Give rest with the saints, O Christ, to the soul of your servant, where there is no pain, no sorrow, no suffering, but life everlasting. “

These entire psalms together with the verses and prayers that go with it, the canon hymns of the service, and the special funeral songs of St. John of Damascus all are a meditation on life and death. They are, in the context of the new life of the Risen Christ who reigns in the Church, a lesson of serious instruction for those who are immune to the fully tragedy of sin and its cause which is death.

The joyful canon sung by the Church song of death brings realism about the inevitable fact of the final fate of fallen human existence.

“All is vanity in human affairs; all that cannot be enjoyed after death. No wealth is kept; no glory can follow. For once death has come, all of these are lost. Let us say, therefore, to Christ the Immortal King: Give rest to the one departed where the blessed live.” (Third tone)

“I weep and I wail when I perceive death and see laid in the grave the beauty, fashioned for us in the likeness of God, to be without form, without glory, without beauty. What an amazing thing! What is this mystery that happened around us? How were we delivered to corruption and how did we become united with death? Surely, by the will of God who gives to the departed rest.” (Plagal Fourth Tone)

The people are dismissed after giving their final kiss with the singing of the final funeral song:

Thus, this most famous and final of the Orthodox funeral hymns is the prayer that the departed be eternally alive in the eternal rest of the eternal memory of God all of which is made possible and actual by the resurrection of Jesus Christ.

At the conclusion of the Orthodox funeral service, the family is the first to come up on the solea, the raised area in front of the icon screen, they kiss the icon of the Resurrection (Anastasis), they pay their respects to their loved one and line up to receive condolences. Mourners approach the altar, they kiss the icon of the Anastasis, they pay their last respect to the deceased and offer their condolences to the family.

At the conclusion of the condolences the family has a few moments for a last farewell before the coffin is closed. The pallbearers follow the priest out of the Church to the hearse and the funeral cortege departs for the Cemetery. 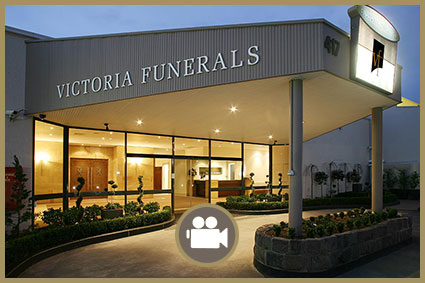